Not long back from a visit to the UCI 2.HC Tour of Qinghai Lake, based in the Qinghai, Gansu and Ningxia provinces in north western China. The event is well established, having this year hosted its 16th edition and it is one the marquee events featuring as part of the UCI Asia Tour calendar.

Whilst I recognised that the event was well established and I had heard nothing but good things about this race, my expectations were about to be far exceeded. In my role as continental adviser for Asia and Oceania, this was first my first visit to an event. It was a relatively short stay, only seeing four stages before having to return home. I arrived two days out from the event so that I could play a key role in their pre-event briefings and training of key personnel.

The event had experienced some issues on the previous year’s edition. Two significant incidents took place on stage 1 in 2016 whereby there was a collision between a motorcycle and cyclist, early in the race. Then late in the same stage, a member of the local public decided to walk out in front of the race as it was closing in on 2km to go, as the peloton touched speeds of 65km/h. Whilst both incidents resulted in hospital time for several of the cyclists, luckily no-one was seriously injured.

The organiser was subsequently contacted by the UCI following the 2016 edition, issues were raised and several key recommendations were made. My visit was linked to those issues experienced but more so it was about an attendance, as a continental adviser, to what is one of the most important races in Asia.

In 2001, when the inaugural event took place, the province of Qinghai was very different to the one that the race visits today. Many parts of the Chinese population, particularly from the eastern half of the country, were not even aware of the province, let alone the incredible beauty and interesting features contained within it. The television coverage, the use of the media and the development of a relationship between governments, driven by the race, has all played a crucial role. Taking advantage of its natural assets and landscape, the provincial government targeted road cycling as a sport in which they could utilise as a vehicle to promote their province. Development of the cities within the province, generating tourism revenue, enhancing federal government interest and provide a source of entertainment for its communities. 15 years on and the Qinghai province now boasts an exploding domestic tourism product and infrastructure like roads, shopping centres, hospitals, sports institutes and hotels, many of which have all been created as a by-product of the race. This is an event that has clearly generated a genuine legacy for the people of the province. Recognising the value in the product, the event has now spread to two neighbouring provinces, Gansu and Ningxia. In recent years, the three provinces have now become co-hosts of this massive event.

The event is owned by the Qinghai provincial government and so government departments and many of its staff are therefore obligated to contribute. With such high-level government support, the race then benefits from a significant police presence around the races as well as a PR and promotions campaign which is heavily geared toward the creation of an ‘ownership proposition’ amongst the people of the provinces. There is an immense and obvious pride amongst the people working on this race and this translates to a huge number of people across all parts of the race, motivated to do their very best work. In fact, huge numbers of the event time personnel within the organising team are volunteers – either nominating themselves or nominated by their government departments in the case they are public servants.

After spending time with their large contingent of drivers and motorcycle pilots, offering training and advice on best practice, we next day move into opening ceremony mode. The opening ceremony could only be described as impressive. I will not profess to be any part of an expert in Chinese culture but it strikes me that the parade and pageantry created around this type of celebration seems a critical part of the overall event. When I was asked to speak at the ceremony and offer the welcome address on behalf of the UCI, I was not at all expecting a full athletics stadium of 10,000 screaming people and a live TV audience of several million. Quite the experience. Featuring a terrific combination of music, dance and singing, I was engaged from the beginning. I was probably the only one of the front row VIPs that were tapping their feet. 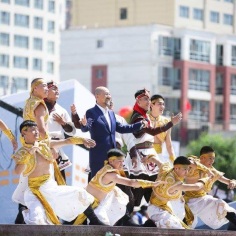 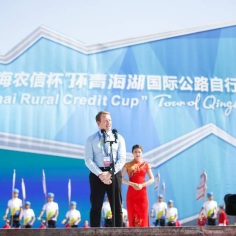 Importantly, the presentation of the teams and their riders were weaved nicely into the occasion, as they circled in and around the performers, entering and exiting the stage one by one as they were introduced. As is a regular sight in the modern day, many of the riders rode with one hand on the handlebars, the other, held a phone, recording every part of the experience, ultimately destined for Facebook, Instagram or YouTube. The riders were enjoying the experience, which is critical, particularly when you consider there was a transport to the opening ceremony involved of more than an hour. When the team gets that sort of exposure and the riders enjoy the experience you don’t so much mind the interruption to their pre-race preparations.

The next day it is straight into racing and stage 1. This year the race begins in Ledu, host of the opening ceremony, finishing in Xining. A reasonable lump in the middle of the stage didn’t manage to dislodge too many of the sprinters and a big bunch finish into Xining was the order of the day. The race was won by a Spaniard, Jon Aberasturi, who would go on to win multiple stages. This race is truly global in terms of participation with teams from five different continents racing in the 2017 edition. In its 15 year history, the race has been won by 15 different riders from 10 different nations.

Stage 2 returned to Xining but for a circuit race. This was the course that had become notorious after stage 1 2016 but this year it was completely incident free. In fact, the security along the course was of an exceptionally high standard, given the 14km course effectively shut down the city of Xining. The trend continued across stages 3 and 4. My observation would be that safety and security here is amongst the highest standard of any race anywhere in the world. Yes, the political landscape in China makes this more possible but the practicalities of deploying and briefing personnel along the course, then securing a course surrounded by such a massive population remains an impressive feat.

Stage 3 and 4 saw the race turn on its head. Stage 3 featured a ‘Hors’ category climb which could only be described as epic. Climbing to a peak elevation of over 3,700m, the 30km of climbing completely obliterated the field with many riders crawling into the finish in Guide many, many minutes behind. A group of seven riders went away and made the running, impressively staying away from the large chasing group, due in part to both the motivation of the lead group and a lack of collaboration in the chase group. When the stage was said and done, seven riders had generated themselves a handy lead on general classification.

Stage 4 contained a similar course profile with one major climb in the middle, utilising some of the same roads as the day prior but in reverse. Interestingly, the ceiling of the stage, 3,900m, was 1,300m higher than the Tour de France as it climbed up through the French Alps on the same day, on the other side of the planet. It seemed a shame to me not to have a helicopter in the air on such a day, in order to capture what is truly spectacular scenery. The stage passed by a number of small Tibetan villages, the backdrop of prayer flags as ever present as the race and the surrounding scenery. The stage finished by the spectacular Qinghai Lake, the largest lake in China, high up on the Tibetan Plateau. For the final 40km of flat, the riders were battered by cross wind, again having a huge impact on the overall race position of so many riders. A combination of tough climbing and trying conditions, too much for some of the riders not able to finish the stage or disqualified by the commissaires for trying to use irregular and incorrect means to keep up. After just 4 stages more than an hour separated first to last on general classification.

Each day I and the UCI international commissaires spent time with the organising team, before and after the race, offering our feedback and advice on the race, the course and the event operations. We spent time with the key personnel, the drivers and the motorcycle pilots, explaining daily what we would like to see from them. All with the objective of helping to grow and develop the event and ultimately the capacity of cycling in the region.

The next day it was home for me having experienced a race of great variety across the 4 stages and some lasting memories of a very enjoyable time in Qinghai. The Tour of Qinghai Lake is a wonderful event which plays such an important part in the landscape, physically and metaphorically, of north western China. It is their major event. It also sits smartly in this location and remains sensitive to its cultural surrounds and to the friendly people located in the region. The government representatives around the race talk of a 100-year plan for this race and I have no reason to think that they are being unrealistic. There is an absolute commitment to this event and I know that when I send across my advice and recommendations that they are received with a genuine sense of cooperation and collaboration, along with a commitment by the organiser, to implementation. This is bike time bike racing but with still so much potential to grow and develop, upside aplenty.

Reportedly the highest average elevation of any race on the UCI calendar and with stage 6 finishing at 4,120m perhaps the highest finishing point of any. This race is unique in so many ways.

Unfortunately, after I left, stage 11 was marred by extreme weather issues which forced the stage to be stopped, due to a number of crashes. The decision being taken by the commissaire panel in consultation with the organiser. The nature of road cycling means it always exposes itself to the elements and unfortunately it interferes more than other times. Based on reports, the organiser handled the situation well, with riders quickly evacuated from the course to the finish location, with 80km still to race.

Well done to the Tour of Qinghai Lake team and I look forward to seeing this great race again some time.

Steve Peterson consults to the UCI and in the past has assisted with the development of some of the most successful cycling events ever. Get in touch here if he and the Sport Projects team can assist you.